Pattaya Thailand is a booming beach resort city with a population of 107’000 situated on the coast of Chonburi Province with a reputation as being a much sought after destination for those active or seeking a sex tourism experience. Prostitution is technically illegal across Thailand though the rules are bent in many cases, Pattaya plays home to literally dozens if not hundreds of massage parlours and gogo bars etc, including the infamous ‘Walking Street’, notorious among Western tourists as the place to find a taste of local action at the right price, while also being at the centre of Asia’s largest Gay & LGBT scene not to mention providing hideaway location for ‘x’ amount of foreigners engaged in organized crime, gang related disputes extremely commonplace and tourists advised to watch their backs in regard to regular petty crime/street crime etc

In a tourist bar heaving with young, local girls, Dan, an undercover rescue worker surveys the situation expertly rubbing shoulders with ‘sex tourist’ patrons and getting in on the gossip of the day. “It’s a rough industry” Dan says, a man who has seen the worst that Thailand has to offer and elected to do something positive about it through rescue work targeting blatantly illegal activity while seeking to protect and or extract the most vulnerable members of the sex industry, that is the underage girls and human trafficking victims. Statistics point to Australian men as comprising the worst offenders when it comes to general sex tourism around Asia with German men a close second. The difficulty for the rescue work group is that ethics aside in most cases these men are not breaking the law but merely exploiting it to their own advantage. The law breakers may be hidden far behind the scenes, the masage parlour owners, local mafia people, human traffickers? The mentality is small gains, one day at a time, one rescue at a time. A battle fought without weapons. 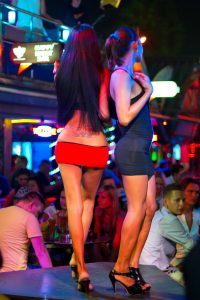 Ironically it is not only the sex workers who suffer the kind of pyschological traumas that go hand in hand with selling your body for a price. Dan speaks with many men who report mild, nagging or severe guilt issues as the Karma catches up with them and this Karma is a powerful thing. The cheap cocktail of guilt and regret oozing from their pores like a cold sweat, the stories of failed relationships and broken marriages flowing like no-name brand wine. “Do you think after we die we will have to pay for all of these bad things we have done?” a lonely punter ponders, sadness and emptiness etched into his very features.

For rescue worker Dan, he admits he can see both sides of the problem. “When we first meet them (the girls) they hate themselves, these girls were raped and abused and now they feel that’s all they’re worth”, he adds “Men pay for sex and then they leave, they don’t journey with the girl, they don’t see her crying in her room, they don’t see the side I see after a rescue’. In reality there could be hundreds maybe thousands of girls across the country who would benefit from an intervention or rescue action, there will always be a number who don’t want to be helped, perhaps out of a fear of having no other way to support themselves or simply as a result of knowing no other form of existence and this comprises part of Dan’s challenge, to re-inject lost hope and lost pride where it is desperately needed.

Surprisingly or unsurprisingly depending how you look at it, sex workers are not the only ones caught in a dark place. Reports of western men committing suicide are not uncommon, jumping from hotel balconies in what has become known as “The Pattaya Plunge”, the burden of guilt and hopelessness too heavy to bear hence the appearance of support groups like the MST Project and Night Light International. Dan believes with more backing these groups could help to make a difference, to help sex tourists by reducing the damage they do both to themselves and to the disadvantaged women they choose to exploit. Late January to early February is Chinese New Year, one of the busiest times on the Pattaya calendar, closely followed by the April Songkran festival or Wan Lai as it is locally known and in mid-May the Miss Tiffany Universe four-day Pageant where transgender and transsexual contestants from across Asia compete for place awards live on Thai national television receiving audiences of up to 15 million. 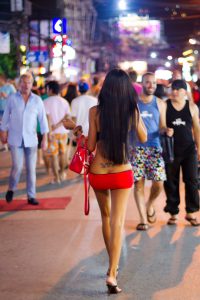 In addition to the Australian and German contingent there is a new group in town sampling the local wares, middle-eastern men from such places as Kuwait, Oman and The Emirates have been arriving to Thailand in their droves to escape the repressive regimes back home and let their hair down without any fears of offending their peers. In the sex capital of ‘Walking Street’ 29-year old Fahad says “Thailand is very different to Kuwait, in Kuwait we cannot even look at a woman without suffering consequences, here we can behave like young men!” The global black market database ‘Havocscope’ suggests that Thailand has an approximate total of 250’000 sex workers bringing in $6.4 billion annually- around 10% of national GDP. Some local NGO’S estimate the figure at closer to 2million sex workers operating in the country. In Bangkok some say out of all those men exploiting the sex industry only 5% are westerners or foreigners, the other 90% + being Thai businessmen, Thai retirees and Thai military or ex-military personnel which puts an interesting spin on the rescue work mission. At the end of the day it is about protecting and or standing up for the rights of a minority group and rescue worker Dan has no regrets about leaving behind a comfortable life in Australia to fight a different type of battle in and around the sun-bleached shores of Pattaya.