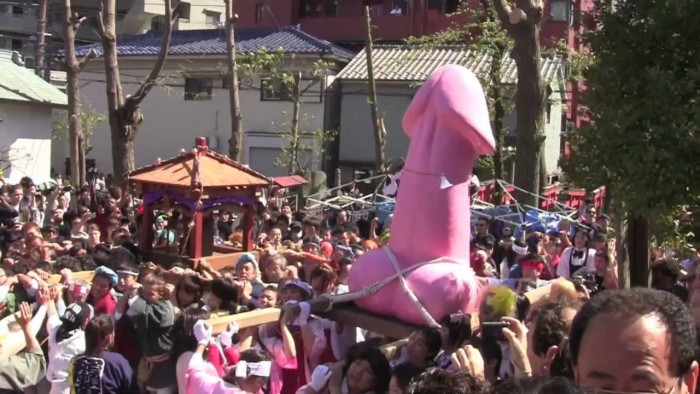 Every spring, on the first Sunday of April, people go to Kawasaki, Japan, to celebrate the Kanamara Matsuri or the Festival of the Steel Phallus. Also known as Japan’s Penis Festival, this event is the celebration and devotion for fertility, also honoring the mighty penis.

During this festival, people take part in the procession and parade of three gigantic phallic-shaped mikoshi (portable Shinto shrines) down the streets to the Kanayama Shrine.

There’s the Kanamara Fune Mikoshi, a steel penis in a ship, the Big Kanamara Mikoshi, a phallus made of wood, and the pink penis mikoshi known as Elizabeth, donated to the festival by Tokyo drag queen club Elizabeth Kaikan.

You will see Penis Everywhere

Since the festival is dedicated to the male sex organ, expect to see penis –themed memorabilia such as key chains, toys, pens, candles and many more. Of course, the most popular penis and vagina shaped lollipops are also sold and you’ll see revelers sucking on them. You can also try carving a penis out of a radish or posing with penis-shaped sculptures.

This festival came into being because of a legend dating back to the Edo period where a sharp-toothed demon fell in love with a young beautiful woman who did not love him in return and instead married another man. Angered, the demon inhabited the young woman’s vagina and bit off the groom’s penis with his razor sharp teeth on their wedding night. The woman remarried and the demon once again bit the second husband’s penis. The young woman then sought the help of a blacksmith who fashioned an iron phallus to trick the demon. The demon broke its teeth when the iron phallus was inserted and left the woman’s vagina for good.

From then on, the legend was commemorated by way of the Kanamara Matsuri. The enshrinement of the actual steel phallus at Kanayama Shrine.

In the 1600s, the Kanayama Shrine became the place for prostitutes to pray for protection against sexually transmitted infections. Eventually, people started coming to pray for fertility and long marriages. People also come to the shrine to pray for a successful business and a prosperous life.

This event draws in huge crowds each year and is gaining increasing popularity. Especially among foreign visitors. It has also become popular with the gay, lesbian, bisexual and transgender communities.

Appeal of Asian Escorts in the Adult Industry